This project consists of the re-calibration of the hydrogeological model of a large open pit mine based on a new conceptual hydrogeological analysis performed by Itasca and the model improvements achieved based on this new conceptual understanding. The project and its results highlight the importance of conceptual hydrogeological models and understanding and their impact on the results and predictions of their numerical counterparts. Furthermore, the model was later used to provide pore pressure distributions for slope stability analyses and to test the effectiveness of different depressurization and dewatering plans for the pit.

During the end of 2019 and the beginning of 2020, Itasca Chile S.p.A. was tasked with migrating and updating a numerical hydrogeological model of two large open pits to MINEDW software.

The main objective of the work performed was to construct a numerical model for the pits to be an updated tool that would support operational decision-making in relation to the depressurization and drainage of both open pits under study. There was an additional requirement regarding the running time of the model. Previous models developed in other software by a different consulting company had running and post processing times that were incompatible with operational needs.

The model was required to predict and allow for the extraction of pore pressure distributions for the predictive stages of the mining plan, estimate the pit entrance flows (seepage), and evaluate different technical-economic alternatives that would meet, through the implementation of drainage plans, the hydrogeological objectives set to ensure the slope stability of the pits.

The mine has two open pits and is found in the north of Chile. The pits are found at altitudes above 4000 mamsl, near the Andes mountain range (Cordillera de los Andes). The weather is marked by summer rainfall of around 200 mm per year, typical of the Andean Altiplano.

In terms of the geological setting, the study area is marked by volcanic and pyroclastic deposits, as well as igneous bodies of Paleozoic to Quaternary age. Furthermore, the pits are marked by different fault systems and major faults that control much of the geotechnical and hydrogeological regimes of the area.

Initially, the work carried out by Itasca consisted of building a new 3D numerical hydrogeological model for the pits under study, based on a pre-existing conceptual hydrogeological model carried out by another consultant in 2019. The construction of this numerical model also included updating the available information for groundwater levels and pumping rates up to February 2020. Figure 1 shows the constructed model with some of the included piezometers and pumping wells.

From the recalibration of the model, many improvements were achieved, with significant changes to areas in the pits that previously presented results with high uncertainty. This highlighted the importance of hydrogeological conceptual understanding and the impact relatively small changes could have on numerical models and their corresponding predictive results.

The initial methodology for the project revolved around using the existing information and conceptual model for the development of a new numerical model in the MINEDW software.

For the calibration of the model, groundwater levels, water balance, pit inflow volumes, and seepage locations were used. For each variable, the observed values were compared to those produced by the model until all the statistical standards were satisfactorily reached. Later, all the initial predictive models were run.

For the model construction, all available information was used and correspondingly incorporated into the model, which encompassed both open pits.

The numerical model has approximate dimensions of 15 by 20 km. The model mesh has differential discretization for areas of interest, with elements of average side length of 15 m near the pits and up to 500 m near the model edges. The model has more than 7,000,000 nodes and 14,000,000 elements and includes more than 200 structures and faults. Furthermore, a Zone of Relaxation (ZOR) has been included for the pits, representing the area underlying the excavation surface that is expected to present changes in hydraulic parameters. The ZOR, as well as other model features, are shown for one of the pits in Figure 2.

With the existing conceptual model as a starting point, Itasca initially updated the geometry of certain hydrogeological units for the MINEDW model, subdividing the units based on structural considerations and structural domains. For this, hydraulic test results as well as fracture and fault distributions were considered. Furthermore, a new recharge distribution was considered based on a study on fracture interconnectivity indexes for different areas around the pit.

The calibration process relies on the hydraulic parameter ranges set for each hydrogeological unit during the conceptual model. In this regard, the calibration of the model is performed by adjusting parameters such as conductivity, specific storage, specific yield, and anisotropy for each hydrogeological unit within the defined ranges and assessing the combination of parameters that better represents the field observations and measured values. For the calibration of the current model, groundwater levels, water balance, pit inflow volumes, and seepage locations were considered.

For groundwater levels, data from more than 400 observation points (open wells and vibrating wire transducers) were considered for the calibration. For these, both the hydraulic head and tendencies over time are analyzed and compared to both national and international standards, and the models are considered “calibrated” when certain statistical criteria are met.

This is done to acquire the initial water levels from the steady state simulations that would later be used in transient calibrations. The transient model, in contrast to the steady state model, considers the evolution of the hydraulic regime over time.

For the initial calibration, groundwater level values were found to be within the acceptable standards to proceed with predictive simulations. A graph showing the steady state calibration results is shown in Figure 5, while the statistical parameters achieved are shown in Table 1.

Regarding seepage, both flow rates and locations are compared for each pit at given times. The location of seepage within the pit for the model is compared to field observations as well as photographic and satellite imagery to ensure that the model correctly represents the areas where the groundwater tables are at surface level. Furthermore, the flow rates from this seepage are compared to field records of pumping and dewatering operations. An example of the seepage areas identified by the model is shown in Figure 6.

Even though the new subdivision of hydrogeological units implemented by Itasca allowed for improvement of the model’s calibration as compared to previous models, the new sub-units still showed the largest deviations from observed values in the calibrated model. This pointed to an incomplete conceptual understanding of the flow regime in this area of the pit.

Based on this deficiency and the need to improve the calibration for these areas of the pit, a new revision of all available databases was performed. This encompassed the revision of hydraulic test results, pumping data, structural data, televiewers, and groundwater level and pressure measurements.

From study of the data, it was found that certain packer test results had been left out of the initial conceptual model developed by another consultant. This discovery extended the conductivity ranges for different hydrogeological units, allowing for new hydraulic values to be considered in calibration of the model. Figure 7 shows the conceptual conductivity ranges for each hydrogeological unit, as well as the new extended ranges (green) achieved by the new conceptualization.

Furthermore, arising from these new ranges, changes were also made to the multiplication factors of the ZOR for the pits. This also allowed for better representation of pit inflows, as the initial model tended to overestimate the seepage at the pits.

As per the objectives established, the model has been used to aid in operational decision-making in relation to the depressurization and drainage of both open pits by simulating different predictive scenarios for which the different results were later compared and analyzed.

In this regard, the model results were mainly used as input for slope stability analyses for predictive mining plans and to assess the effectiveness of different depressurization plans for the pits.

MINEDW allows for the extraction of 3D pore pressure distributions for the pits at any given date of interest. In this regard, dates of interest were defined, the model results were analyzed, and pore pressures were noted to be used in later slope stability analyses to identify the Factors of Safety around the pit for different mining plan stages.

First, a Do Nothing Else (DNE) scenario was modeled, in which no additional dewatering structures were added for predictive simulations. This represented the “worst case scenario” from a slope stability point of view, as there is no active dewatering for future scenarios, and only passive depressurization is allowed. In other words, this scenario presents the closest groundwater levels to the pit walls for the calibrated model being used.

After the initial DNE simulations, the pit areas of geomechanical concern were identified, and depressurization and dewatering plans were designed. The pore pressure distributions from these scenarios were later used again for slope stability analysis, in a feedback cycle between the hydrogeological and geomechanical numerical models to aid with decision-making for the mines. An example of pore pressure distribution from the model, as well as the distance between water table and pit slope, can be seen in Figure 9.

As mentioned above, the MINEDW model is also used to test the effectiveness of different depressurization and dewatering plans for the pits. These plans can be designed or targeted at depressurizing certain areas of the pit with slope stability concerns, dewatering areas of operational importance, or a combination of both.

For the model described, one such dewatering plan has been modeled and assessed so far. This plan aims to achieve depressurization targets for a predictive 5-year mining plan. The design included more than 100 pumping wells that are planned to be incorporated gradually over the 5-year period. Examples of the results of this dewatering plan are presented in Figure 10. 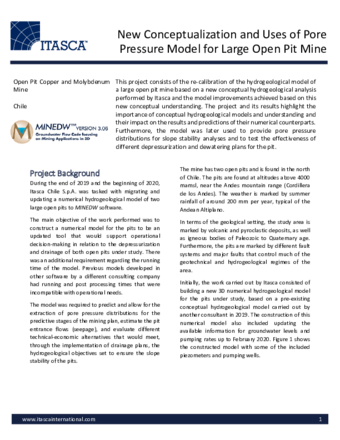